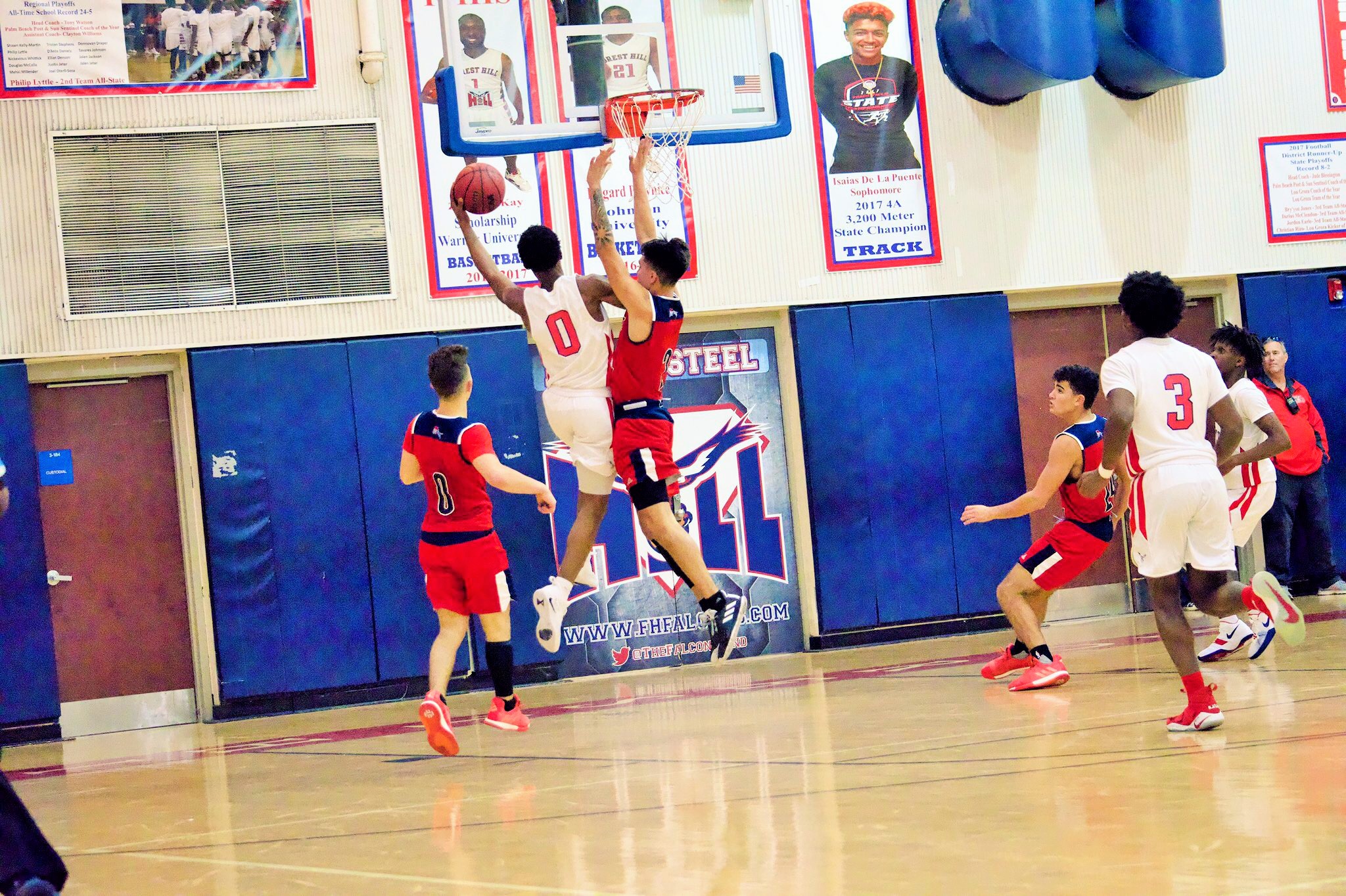 Like a Thanos snap HS boys regular season is gone. Playoff time!! Look out for the #pbchoops preview & podcast next.

The regular season ended Saturday and #PBCHOOPS teams now look forward to the playoffs. There was a final shake up in the rankings as Palm Beach Lakes moves up 1 spot to #2 after Forest Hill suffered its second loss in a 7 days to a 10-9A opponent, Santaluces. All season we pegged 13-8A as the toughest district in the county but 10-9A proved it's still has some power teams that can play with anyone. St Andrew's finished strong to stay at #4 and Santaluces jumped back in the Top 5 after a buzzer beater win over Cardinal Newman Saturday night and the win Tuesday over Forest Hill.

Now the time has come to put it all on the line. #PBCHOOPS teams have their work cut out for them if they don't want to head home early. Each class has a team or more with a chance to make it to Lakeland but for that to happen they will need to be firing on all cylinders.

The 2018-19 season was one of growing pains for the majority of teams in Palm Beach County. Quite a few started high numbers of underclassmen or players new to varsity. This caused several teams we traditional see at the top of the standings struggling early on, yet as the season has played out players and teams started to come together just in time for the playoffs. Here's my look at the districts championships and projected winners:

Santaluces has wrapped up the top seed 17-7 but has really been an up and down team with a flip of a coin but has put some big wins together in the last week. Park Vista holds the #2 seed and will find themselves in a dogfight with the winner of Spanish River and Lake Worth to open up districts. Boca some how locked up the 3rd seed and has to face a Jekyll and Hyde Atlantic team for a chance to advance, although to be honest don't see much resistance coming from either of them in the semifinals.

This really has been a tight district all year long and will get even tighter because every team from 1 to 6 thinks they have a legitimate chance to win it. Guess what? They do, it's been a round robin between the teams trading wins with most games being close. In the end, Santaluces is too talented not to make a strong push and I like them over Lake Worth in the district championship. Lake Worth is on a roll reeling off 5 wins in a row to end the season. Atlantic is so loaded it's hard to imagine the Eagles not making a push. Spanish River is in every game and has a game changer in senior SG Charles West that's made a habit of knocking down big shots. Boca has been up and down all season but seemed to be on the upswing before a couple losses late in the season. They play a lot of young guys but senior Brayden Applegate has made a huge effort to put the team on his back, he'll need to that and more for the Bobcats to advance to the regional round once again. Park Vista may be the team with the most upside in this tournament, they are extremely talented and if all their pieces come to play they have a good chance of winning it.

DF Prediction: Santaluces. The Chiefs have arguably have the best player in the district, junior Kemari Brown. He's been coming up big all season, doesn't run and hide during crunch time.

#PBCHOOPS Prediction: Park Vista. Remember the name, Erik Pratt, if the Park Vista junior guard plays up to his potential he can change the dynamic of any game with his shooting.

Wellington is the top seed and I don't see them getting beat. Jupiter has captured the number two seed and seems primed to make some noise. Palm Beach Central is the three seed and the dark horse in the race with a trio of talented guards.

Wellington finished the season strong going 7-1 with the only loss coming to an athletic Atlantic team in the final week of the regular season. Jupiter has beaten Palm Beach Central twice already this season. Will three be the charm or will Central find a way. John I Leonard has been up and down all season but has a player in junior guard Jevon Allen who has put up several 30 point games this season.

DF Prediction: Wellington. Wellington will wrap a spot in the regionals, I like them in a close one over Jupiter.

#PBCHOOPS Prediction: Wellington. To be the man you have to beat the man. Until that happens when it counts, Wellington will be the choice in any 9A contest.

Forest Hill is the #1 seed but has been slumping as of late. Palm Beach Lakes is the #2 seed and putting things together at the right time. Royal Palm comes in as the #3 seed, going through a rough season trying to put it all together. Dwyer is the #4 seed, we have to remember Dwyer is still Dwyer and that means they still are King in Palm Beach.

This is a very strong district in Palm Beach County and forcing teams to be at the top of their game every night. and Olympic Height, wow!!!! Talk about resurgence, they face a Dwyer team they took to the wire before falling by a point. West Boca is not shabby but gets Lakes in round 1. While Boynton is buying into its Coach Addison Smith and go head to head with Royal Palm Beach who has big expectations with its senior group. Can't wait to see the quarter and semi-finals of this tournament.

DF Prediction: Lakes and Royal Palm have been close all year long look for Royal Palm to pull it out and meet Forest Hill in the championship game, Forest Hill wins the district.

#PBCHOOPS Prediction: Lakes has been the best team all season long and have the two of the top performers in the county this season in Sheldon Edwards and GianCarlo Rosado. Lakes over Forest Hill in another close game.

Suncoast has won six straight district titles but this year comes in as a #2 seed behind Port St Lucie. If the Chargers want to go for seven in a row they will need to figure out how to handle the Jaguars and dynamic PG Nate Davila.

Suncoast junior PG Sam Rolle has been through the battles and is turning it on at the right time, finishing with a triple-double in the last game of the regular season. The Chargers will need his experience and leadership to advance.

Oxbridge Academy finished the season undefeated 22-0 and was dominant. Now they are in familiar territory, favored to win 11-5A and advance deep in the Region 3 5A bracket where they've lost 3 seasons in a row to Tampa Catholic. Cardinal Newman once again is the #2 seed and still hasn't played their best game yet.

The Thunderwolves are the most experienced team in the field and are playing with off the charts confidence. Although Cardinal Newman is the #2 seed, the team to watch is Somerset Canyons. The Cougars have been hit hard by injury but when healthy have nice size and a senior guard who can go off at any time. Although one spot is a lock the other spot in the championship game is wide open.

#PBCHOOPS Prediction: Oxbridge Academy over Somerset Canyons. As mentioned Somerset has been playing better as they have gotten players back. Plus they have Max Demeus, the senior has been here before and looks poised to make a statement.

Saint Andrew's finished the season as the #4 team in the #PBCHOOPS Top 5 and undefeated in district play. Coral Springs Charter is a very talented team that hasn't figured out yet how to beat the Scot's. While North Broward Prep has had a solid season.

Although Saint Andrew's won the regular season title and went undefeated in district play, they played two close games with Coral Springs Charter. The Scot's are led by big man junior Yusif Basa-Ama, sophomore Joshua Minot and junior Jack May. May has come on of late and has been leading the team in scoring many nights. Charter is loaded and led by explosive junior guard Ivan Reynolds and shooters all over the floor including 6' 3" freshman Aiden Abell. This is going to be a battle and looks like a three-team race that will include North Broward Prep led by junior Dominic Denny.

This has been and will continue to be Westminster Academy's district as long they are in it.

Westminster is the reigning state champions and I see no resistance in them going to get another title. Benjamin has an amazing player in 8th grader Marvel Allen, what he's doing at the varsity level is mind-boggling. Unfortunately, the Bucs are too young and the Lions are playing on a whole other level.

The winner of this district has a real shot of heading to Lakeland and winning a state title. The stakes are high for the top two teams Jupiter Christian and Village Academy.

Benjamin, Palm Beach Central, Jupiter, John I Leonard, Cooper City, Jensen Beach, Lake Worth, Boca Raton, Grandview Prep, Deerfield Beach, Saint Andrew's, Palm Beach Lakes. Those are the teams that Jupiter Christian and Village Academy have played this season. If your counting that's 6 9A teams, 2 8A teams and 3 of the top small school programs in South Florida. Needless to say, both the Eagles and Tigers were preparing themselves for what they expect to be a long postseason run. No disrespect to any other teams in 7-3A but this is a two-team race.

Grandview Prep picked up yet another #1 seed and continues to dominate this district.

Really not much to see here the Pride are class of 7-2A and have been so for a while now.

Not a district normally covered deeply but Pahokee has been competitive all season against other Palm Beach County teams and deserves some attention.

Had a chance to see Pahokee up close and in person last week against Cardinal Newman, they gave the Crusaders all they could handle. The Blue Devils are extremely athletic and have explosive guards that can get to the basket and hit shots. Not much depth on the squad but the first 6 or 7 can play. Also not sure how deep 1A is in the state of Florida but they have real shot at making it to Lakeland and if they get there could also turn some heads.

All games played at HOST site unless noted/Emphasized

8-1A Host: All games including championship at higher seed

7-3A Host: Lake Worth Christian