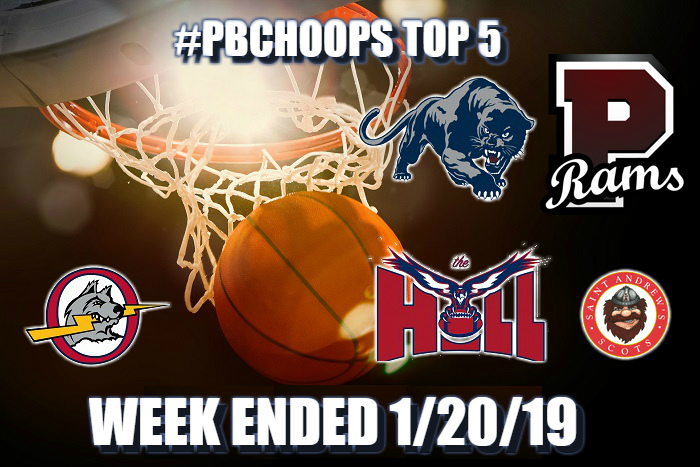 We're back a day later than normal as we let matchups playout from the Martin Luther King holiday events. The results from several blockbuster head to head top 5 matchups shape this week's poll as teams start to gear up for playoff time. Here's a look back at what transpired and who ended up where in the poll:

#2 Forest Hill - Forest Hill took home the victory in the highly anticipated game of the year so far with Palm Beach Lakes Tuesday. The Falcons followed that up with a trip to Jacksonville for the holiday weekend where they would face some of the top teams in the state. In the end they suffered their first loss of the season to the state #19 ranked Jacksonville-University Christian on Saturday before closing out the event Monday with a win over powerhouse Potter's House Christian.

#3 St Andrew's - The Scot's move up one spot after another solid victory over a talented Coral Springs Charter team Thursday, that win made even more impressive after Charter took down Miami-Norland Saturday night.

#4 Dwyer - Mentioned last week that the Panthers seemed to be hitting stride after a very difficult schedule to start the season. It all came together Friday when they jumped all over rival Palm Beach Lakes and followed that win up with a buzzer beater victory over IMG Saturday.

#5 Palm Beach Lakes - The Rams went into last week with a huge task, 3 games against 3 of the top 5 teams in Palm Beach and Broward. After a gut wrenching loss against #2 Forest Hill Tuesday, Lakes ran into a hot shooting Dwyer team Friday and highly talented Dillard squad Saturday. Lakes finished the week 0-3 but stay in the top 5 based on their body of work.

Teams are beginning to hit the core of their district schedules which means top teams clashing for some pretty big games:

#5 Palm Beach Lakes vs Olympic Heights
After a tough week the Rams head down to Boca to face a solid Olympic Heights team looking to make a statement after a couple of close district losses. This should be a highly competitive game.

Park Vista vs Santaluces
Santaluces is undefeated in district play at 8-0 but quietly Park Vista is setting in the #2 spot at 5-2. A win by the Cobras would be big for their confidence come district playoff time.

Village Academy vs Boca Raton Christian
While not a big name, big school matchup this game could be a very interesting and high scoring game. Both teams feature players that can light up the scoreboard.

Royal Palm Beach vs #2 Forest Hill
A huge district game in more ways than one. Royal Palm is an extremely talented team that has been through alot this season so far both on and off the court, however they always show up for the big games and there is none bigger than facing the #2 Falcons on their home court.

Suncoast vs #5 Palm Beach Lakes
A rematch from December that ended up going down to the last shot. The Chargers are looking for payback and both teams are looking to finish off strong.

John I Leonard vs Jupiter
Every year around this time the Lancers begin to put something together. This game will feature two of the hottest players in the county as junior guard Jevon Allen matches up with senior guard Trent Webb. Allen is on a scoring tear averaging more than 27 points per game over the last 5 for the Lancers while Webb is averaging more than 17 points per game on the season.

These are just a few of the games on tap check out the compete week schedule here http://pbchoops.com/pbchoops/week_schedule