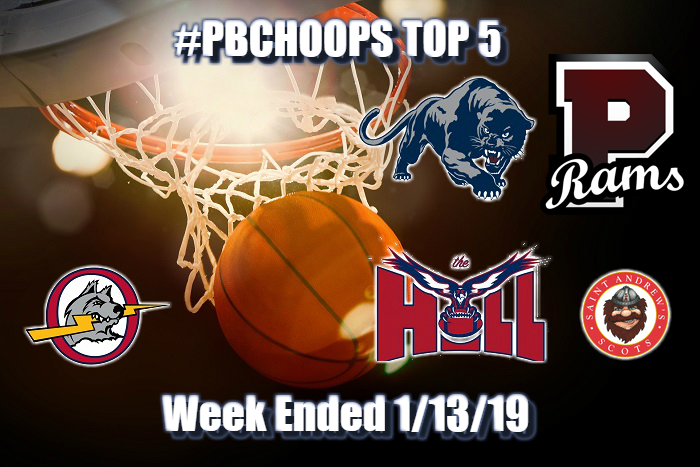 #2 Forest Hill vs #3 Lakes Tuesday in a battle of unbeatens. Dwyer back in a #5 playing better despite a brutal schedule, faces Lakes Friday.

The 5 spot continues to rotate week in and week out. Dwyer earns it's spot back after last weeks #5 Jupiter's loss to Wellington:

#2 Forest Hill - After a very busy holiday break, Forest Hill only laced it up once last week in a 97-64 win over West Boca.

#3 Palm Beach Lakes - Lakes is in middle of a difficult 4 game gauntlet, which included back to back wins over district rival Royal Palm Beach and American Heritage --Plantation.

#5 Dwyer - Don't look now but the Panthers are on a three game win streak, playing well. Their extremely tough schedule has benefited the young group.

Teams are beginning to hit the core of their district schedules which means top teams clashing for some pretty big games:

#2 Forest Hill vs #3 Palm Beach Lakes
This game has a lot of buzz already as two of the top teams in the state class 8A poll face off in this huge district matchup. Forest has been terrorizing teams all year with a brand of pressure defense that comes in waves, eventually wearing even their best opponents down late. Lakes on the flip side brings a potent offense and a stellar defense of their own. This has the chance to be the best game so far of 2019.

#4 St Andrew's vs Coral Springs Charter
This is a rematch of a tough district game a few weeks ago that Scots won. They look to continue their solid play and take a strangle hold on the district with only a few weeks left.

#5 Dwyer vs #3 Palm Beach Lakes
Both teams face difficult matchups on Tuesday night making this game on Friday that much more important.

#1 Oxbridge vs Cardinal Newman
Oxbridge has handled this rivalry of late, the Crusaders are still looking to find their way. This is a big district game.

Palm Beach Central vs Jupiter
The Broncos are on a roll after taking down crosstown rival Wellington Friday night. This will be a competitive game of evenly matched opponents.

Expect one of the better weeks of competition as the areas top teams go head to head http://pbchoops.com/pbchoops/week_schedule