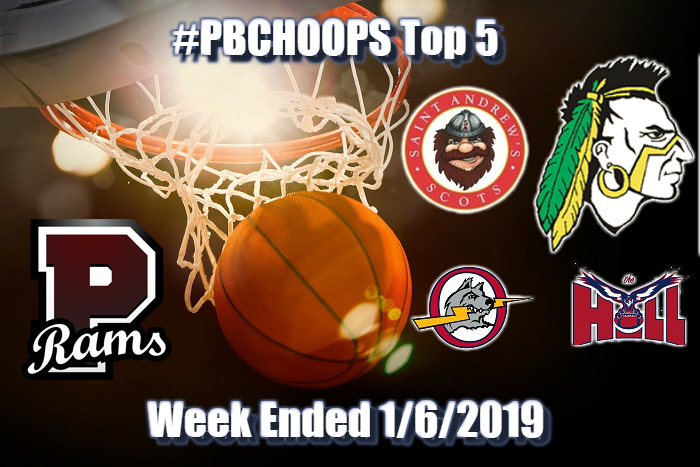 Lots of teams taking L’s outside of top 3. St Andrew’s stays at #4 despite 2 close losses. Jupiter’s strength of schedule gets them in at #5.

It's been a tough couple of weeks for teams outside of the top 3 in the rankings. Holiday tournaments brought competitive matchups but also losses for past and present members of the poll. Here is a look at this weeks 5:

#1 Oxbridge Academy - Oxbridge faced a difficult 3 game stretch and proved they are deserving of the top spot, capturing The Rock Holiday Tournament Championship with wins over Oviedo, Wellington and Pine Crest.

#2 Forest Hill - The Falcons took down a highly regarded Paxon squad out of Jacksonville Saturday to claim their New Year's Tournament title. Now they prepare for a tough district schedule as they prepare for the postseason.

#3 Palm Beach Lakes - Big week ahead for the Rams, rematch on the road with Royal Palm and a matchup with Z-Wade's American Heritage-Plantation squad Saturday.

#4 St Andrew's - St Andrew's suffered two close losses at The Rock Holiday Tournament before closing out with a win. They will need to regroup quickly with a couple tough games against Village Academy and North Broward Prep this week.

#5 Jupiter - Jupiter is in the Top 5 this week for the first time. The Warriors have played a tough schedule and have shown they can compete with the counties top teams.

District games take over the schedule the next few weeks as we see who will finish the season on top.

Village Academy vs #4 St Andrew's
The Scot's coming off a busy holiday tournament season which brought them their only 3 losses. They face a young but battle tested Village Academy squad that has shown they can compete with anyone.

Cardinal Newman vs Somerset Canyons
This is now a district game and both teams are looking to get something going in the New Year. Somerset has been riddled with injuries but is finally getting back healthy. Newman has yet to play up to its potential, should be a good game.

#5 Jupiter vs Wellington
This will be the 5th team from the #PBCHOOPS Top 5 that Wellington has played so far this season. Not to mention this is a district game, in a district Wellington has dominated for the past 4 years. A win in this game will be huge for both teams.

#3 Palm Beach Lakes vs Royal Palm Beach
This is a rematch from a close game early in the season which Lakes won at home with Royal Palm the #3 team at the time. Since then the teams have gone in different directions, the Wildcats have been struggling to find consistency while the Rams are playing well against tough competition.

Dwyer vs Suncoast
Records go out the window when these teams play. Both teams are playing a high number young players and have struggled to find their stride. Dwyer's schedule has been brutal thus far and doesn't get any easier at Suncoast.

American Heritage-Plantation vs #3 Palm Beach Lakes
This game was not on the original schedule but showed up on the Maxpreps recently, we're hoping is not an error. Zaire Wade has been a walking highlight to start the year and faces a Lakes team that has 2 players, Sheldon Edwards and GianCarlo Rosado, averaging over 20 points the last 3 games. Should be exciting.

Suncoast vs Norland
A great Palm Beach vs Dade matchup, Norland is a historical powerhouse out of Miami and is 8-2 so far this season. Suncoast schedule as of late has been difficult but needed for a young group. These games will help speed up the maturation process.

Don't look now but after a whirlwind of holiday tournaments there are only 4 weeks left in regular season. Plenty of teams are positioning themselves to be playing their best once playoffs come around.