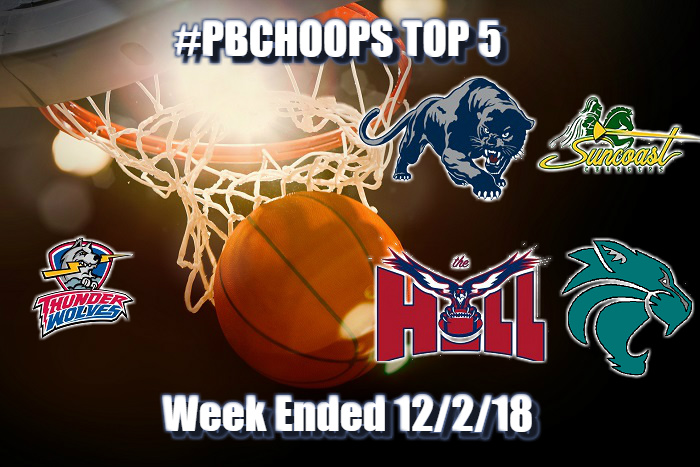 One week into the regular season and things are already starting to heat up, as teams look for early season test as a barometer. Week 1 ended Saturday with Dwyer falling to Cardinal Gibbons at the Kreul Showcase in Broward, while Oxbridge Academy beat a solid Palm Beach Central team to solidify the top spot in this week's poll. Here is a look at the new Top 5:

Dwyer stumbled but need a short memory.. Lakes comes in Tue & wants a spot in the 5. Oxbridge & Forest Hill has been most impressive so far..

#1 Oxbridge Academy - The Thunderwolves are back at the top after two big wins to start the season.

#3 Royal Palm Beach - Royal Palm stays at #3 with two solid wins over Port Saint Lucie and Palm Beach Central. Both games were close but the Wildcats pulled them out, a big step up from last season which saw them fall short many times in similar situations. Bodes well for the rest of the year.

#4 Dwyer - Dwyer drops to #4 following a tough loss to Gibbons but the Panthers can't look back as Palm Beach Lakes is playing well and on the schedule for Tuesday.

#5 Suncoast - The Chargers start the season with two solid wins over a much improved Olympic Heights team and crosstown rival Inlet Grove.

That's this weeks 5 but there are plenty of teams waiting to getting in, most notably Palm Beach Lakes, Santaluces and Jupiter Christian. All three are undefeated and playing well, look out for them.

Games we will have eyes on:

John I Leonard vs Jupiter Christian
The Eagles, fresh off a statement win at home against Cardinal Newman, welcome John I into their newly renovated gym. This game will feature a nice guard match-up between Jupiter Christian senior Gedeon Germinal and John I junior Jevon Allen. This will be another tough test for Jupiter Christian.

Palm Beach Lakes vs #4 Dwyer
Rivalry game, crosstown slugfest, #PBCHOOPS Game of the Night... Whatever you call it, Lakes/Dwyer never disappoints. This year has the makings of being one of the better match-ups of the entire season. The Rams are 2-0 and are led by senior Sheldon Edwards, who is on a scoring rampage to start the year. The Panthers have a senior leader of their own in Mike Ingraham who can also score in bunches. Look for big contributions from Lakes senior guard Steve Ayuso and junior big man Gian Carlo Rosado, while seniors Brandon Williams, Ishmael Goulbourne and junior guard Courtney Grant should all be major factors for Dwyer.

Atlantic vs Lake Worth
One of the best games of the year each year, the Eagles head to Lake Worth to face the Trojans in a early district 10-9A showdown. Senior Avery Brookes has a huge task this year leading an inexperienced but talented Lake Worth squad this season. Atlantic senior sharp shooter Kadeem Wilks is off to a fast start going for 25 points his last time out.

#3 Royal Palm Beach vs Palm Beach Lakes
Tough week for Lakes as they face the #3 and #4 team in our Top 5 back to back. That's life in district 13-8A, where arguably 4 of the top 5 teams in the county reside.

Somerset-Canyons vs #1 Oxbridge Academy
Max Demeus vs AJ Cajuste. That PG matchup alone makes this a must see event.

Lake Worth vs Santaluces
Another historically great matchup which has produced quality games these last few seasons.

Calvary Christian vs #1 Oxbridge
Calvary looked impressive in the preseason, disposing of Santaluces in a lopsided victory. Now they come back up north to face #1 Oxbridge.

Week 2 should bring some separation and clarity, along with some great hoop action.

Check out our master schedule
http://pbchoops.com/pbchoops/schedule?field_player_gender_value=Male&keys=