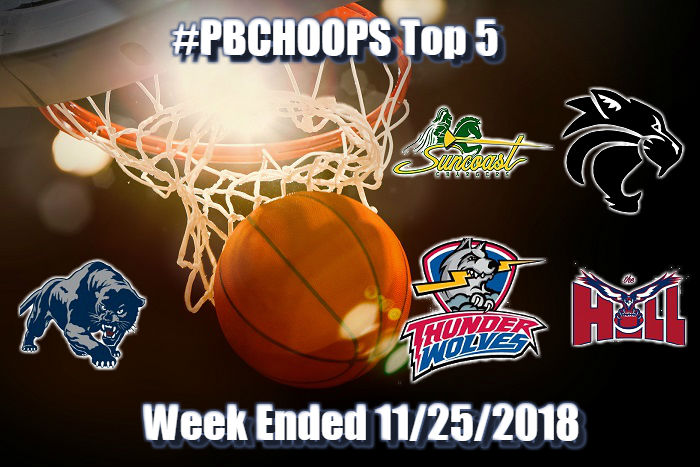 Regular season kicks off tomorrow, expect a lot of movement in the Top 5 as games start counting...

We started off last week with a solid top 5 for the preseason and right from the jump the rankings were tested as preseason #1 Wellington faced off against #2 Dwyer. Dwyer prevailed in a hard fought scrappy game as both teams defenses showed they were in top form. Wellington lost another tough game the night after to Santaluces which suffered a defeat a night earlier to a strong Calvary Christian team out of Broward. When the dust settled in Boynton and at other preseason tip off events across South Florida our rankings were recalculated and ready for week 1 of the regular season games. Here is a look at the new Top 5:

#1 Dwyer - The Panthers move up to #1 after 2 big wins over 9A teams to start off the preseason. The #1 team in the county will be tested early on as they head to the Kreul Showcase Saturday to face Cardinal Gibbons.

#2 Oxbridge Academy - The Thunderwolves make the big jump from a #5 ranking many think was too low in the preseason to #2 after solid wins over John Paul II and Benjamin at their preseason event.

#3 Royal Palm Beach - Royal Palm Beach stays in the #3 spot after a solid win over a very good Deerfield Beach team. They will need to be ready early with two tough games to start the season against Port Saint Lucie and PG Nathan Davila, followed by a loaded Palm Beach Central team looking for respect.

#4 Forest Hill - The Falcons took care of business against a solid Martin County and an over matched American Heritage-Delray team to start the year at #4. They face Palm Beach Gardens Tuesday to start the year and face Benjamin led by reigning #PBCHOOPS Private School Player of the Year Ben Lubarsky Friday at home.

#5 Suncoast - Suncoast is back in the top 5 and deservedly so. They are extremely talented and took care of two tough opponents beating Park Vista and Boynton Beach to finish the preseason undefeated.

This week marks the first week since we started doing the #PBCHOOPS Top 5 on November 23, 2014 that Wellington is not ranked in the 5, a span of 4 years.

Things get going for real this week and quite a few game to watch are on the schedule, here's a look at the best:

Village Academy vs Lake Worth
Under the radar matchup of 2 teams who started the preseason undefeated. Lake Worth is led by senior Avery Brookes and a nice supporting cast, while Village Academy has revamped nicely and is playing well to start the season.

Santaluces vs John I Leonard
Rivalry game and no better way to start the season. Santaluces is flying high after a solid win to close out the preseason over Wellington while John I Leonard has put together a nice squad and looking to make some noise.

Benjamin vs Westminster Academy
The Bucs make the first of what should be meetings with the Lions this season.

Jupiter vs Palm Beach Lakes
Jupiter beat Lakes last year to start the season. The Rams have a high octane offense led by sharp shooter Sheldon Edwards. This should be a good game.

Benjamin vs #4 Forest Hill
As mentioned above this has the makings of a very good matchup.

#3 Royal Palm Beach vs Palm Beach Central
Another game touched on above, Central is a dark horse pick in 9-9A to win the title, Royal Palm will need to be ready for a challenge.

The Kreul Showcase annually produces some of the best cross county match-ups to start the season. This year is no different as 2 of Palm Beach County's top programs head down to Broward for some tough competition. All games are at Monarch High School.

This just a quick look, Week 1 overall should be very competitive.

Check out our master schedule
http://pbchoops.com/pbchoops/schedule?field_player_gender_value=Male&keys=