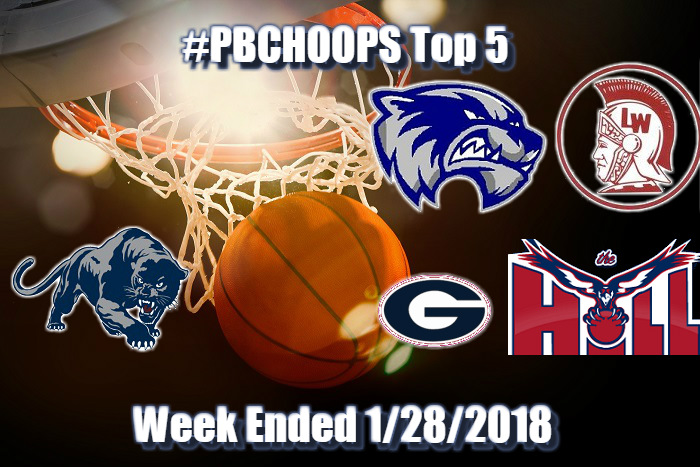 The top 5 teams in this week poll are a combined 91-4. To say they have been dominant is an understatement, but have they all been tested? As we head into the last week of regular district games all questions will be answered. All 5 teams face stiff test as they try to close out district play on a high note.

#1 Dwyer - The Panthers need overtime to defeat a scrappy Royal Palm Beach team out west. Senior Eddie Davis hit a buzzer beater with Dwyer down 1 to win the game.

#1 Wellington - The Wolverines continued to roll now 21-0 and should finish the regular season undefeated.

#2 Forest Hill - All the work for the Falcons leads to this, back to back games against #1 Dwyer Tuesday and #3 Lake Worth. Huge games for Forest Hill.

#3 Lake Worth - Lake Worth came up big last week with a comeback victory of district foe Spanish River, the win secured a top seed for the Trojans come playoff time.

#5 Grandview Prep - The Pride was flown under the radar this season mostly due to their weaker than normal schedule. A win last week over a tough Atlantic Christian team and a 14-1 record were enough to get them back in. The ranking will be tested Tuesday as they face Benjamin.

The overall Top 5 record will take a slight hit this week since a few of the top teams play each other, but these teams have proven they are the cream of the crop all season.

#2 Forest Hill vs #1 Dwyer
This is a matchup we had circled on the calendar early in the season. Little did we know both teams would enter with a combined 2 losses. Dwyer's senior big 3 of Miles Coleman, Eddie Davis and Javonni Quince are battle tested and have proven the,selves in tough games. Forest Hill's senior leaders Philip Lyttle and Tristan Stephens have played great all year. Winner secures the top spot in the district

Benjamin vs #5 Grandview Prep
Benjamin junior Ben Lubarsky is back after missing several weeks with an injury, the Bucs hope to return to the form that had them ranked in the top 5 earlier this year. This is also a big game for Grandview as they prepare for district playoff play.

#2 Forest Hill vs #1 Lake Worth
Tough back to back for the Falcons, both games on the road. Win or lose Tuesday against Dwyer they will need to get up for a talented Lake Worth team. Both teams play suffocating defense, expect plenty of it on both sides