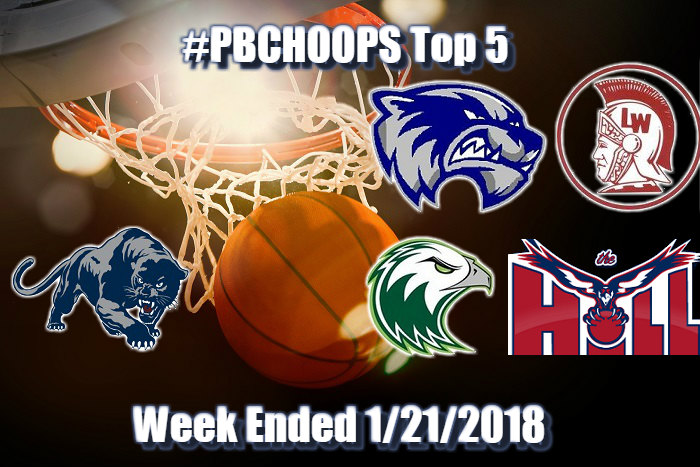 As we head into the home stretch of the regular season, the top teams are beginning to separate themselves from the pack. Our top 4 teams in this weeks poll have a combined record of 68-3. Three of the top five teams reside in 9A while the remaining two reside in district 13-8A. Needless to say the next month of basketball will be extremely competitive.

#1 Dwyer - Dwyer continues to impress, playing with supreme confidence. Friday they beat rival Palm Beach Lakes handily and are a couple of wins from locking up the top seed in 13-8A heading into the district playoff.

#1 Wellington - The Wolverines are 18-0 and off to their best start in school history. All signs point toward an undefeated regular season and another district title.

#2 Forest Hill - Forest Hill completed a successful MLK tournament weekend in Jacksonville with a 46-41 victory over Jacksonville-Parker on Monday. The Falcons biggest test comes next week as they face #1 Dwyer for the top seed in the district and #3 Lake Worth, both games on the road.

#3 Lake Worth - The Trojans bounced back last week after their first loss of the year with two big wins over district rivals Santaluces and Boca Raton. This week they face a hot Spanish River team who has given them problems in the past.

#5 Atlantic - The Eagles are finally back in the top 5 after injuries, absences to key players and an extremely difficult schedule. This made for a rocky road over the last month. Now that almost all the key pieces are back in place, Atlantic has it's sights set on a state title run.

Only two weeks left before district playoff seeding is finalized which means we should expect hard fought games from top teams as the look to gain momentum heading into the playoffs.

#3 Lake Worth vs Spanish River
Spanish River led by seniors Jashone Anderson and Malaccai Davis are coming off back to back wins over Santaluces and Boca. Lake Worth won the first meeting by 12 but the Sharks were in the game until a late run by the Trojans put them away. Lake Worth's big 3 of Jay Medor, Marquess Spann and Avery Brooks have been solid all season, which should make for a great match-up in this pivotal district game.

#5 Atlantic vs Boca Raton
Atlantic received a big boost when junior big man RJ Duhart returned to the lineup last week. They handled Boca earlier this season at the Kreul Classic and still have at least 2 meetings left with the Bobcats before the season ends. Boca has had to deal with adversity of their own and has been close in many games this year. Cade Long has been having an MVP season leading the Bobcats in scoring. Both he and PG Max Demeus will need to play well to beat an Atlantic team finding its stride.

Cardinal Newman vs Oxbridge Academy
Rivalry game that has usually determined the winner district 11-5A over the last several years. This year is no different, Newman has been playing better as of late with the return of some key pieces from injury and the emmergence of 6' 9" big man Emmanuel Onuama. Oxbridge is still without standout junior PG AJ Cajuste but has been playing better with the return of junior Dante Wilcox. That being said the Thunderwolves are still undefeated in district play and look to lock up the #1 seed with a win.

#5 Atlantic vs Spanish River
Tough back to back district games for both teams. An undefeated week by either team would be huge.

Suncoast vs Palm Beach Lakes
The first meeting this season was an epic battle which saw Suncoast pull out the victory late. Both teams have played well since but have also suffered some tough losses. Look for another exciting game Friday.