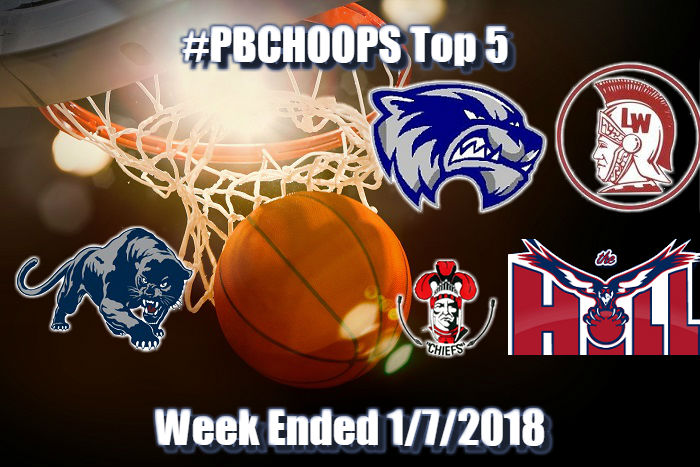 The 2 week holiday break was one of that featured several of the top #PBCHOOPS teams competing against high level opponents. The Top 5 teams backed up their lofty rankings by competing with some of the best teams in Florida. After the dust settled our rankings feature to #1 teams Dwyer & Wellington and an undefeated #2 team, Lake Worth. All 3 have seperated themselves from the pack.

#1 Dwyer - Dwyer remained in the #1 spot despite a heart breaking loss the #3 team in the country, University School, at the Charger Classic Saturday night. You will be hard pressed to find anyone who doesn't believe Dwyer is a top team after their performance.

#1 Wellington - Wellington is undefeated and also did nothing to disprove their top ranking. The Wolverines just keep winning and did so will facing top competition over the break as the notched wins over Saint John Paul II, #4 Forest Hill and Broward powerhouse Coral Springs. They are for real and don't let anyone tell you otherwise.

#2 Lake Worth - Lake Worth is undefeated and continues to impress. Their most impressive win of the season may have come Saturday as they defeated a stacked Florida Prep team at the Charger Classic which includes 7' big man Lahat Thioune.

#4 Forest Hill - The Falcons are a deep, talented teams that has been playing at a high level this season so far. Their lone loss came to #1 Wellington in the Championship game of the Palm Beach Shootout just before the new year. They have yet to play the meat of their schedule, as this final month they will face top district opponents.

#5 Santaluces - Santaluces jumped into the top 5 last week with an impressive showing at the D-HOP and stayed in the 5 this week after an equally impressive win Friday over Wekiva in the Charger Classic. There is no time for rest for the Chiefs however as they travel to Boca Tuesday to face the Bobcats.

Still quite a few teams looking to get in or back in to the top 5 with some big wins this week. Palm Beach Lakes, Spanish River, Boca & Atlantic all would make a strong case with wins. While Saint John Paul II, Palm Beach Central and St Andrew's still have a chance as the season plays out.

District battles begin to heat up as most teams begin to face their rivals over the next month. This week will be big for teams as the jockey for district seeding.

Palm Beach Lakes vs #4 Forest Hill
Palm Beach Lakes has lost 4 games this season by a total of 16 points, the Rams could very well be undefeated headed into this matchup. Forest Hill on the other hand has won decisively with their only setback being a loss to #1 Wellington. Both teams should have something to prove.

#5 Santaluces vs Boca Raton
Boca seems to have found it's stride after a rocky start earlier this season. Cade Long is putting up huge numbers and Max Demeus has been playing at a high level so far this season.

Spanish River vs Atlantic
Big district match-up, River is looking to be added to the conversation of top teams in the county. Atlantic has not had it's full compliment of players all season, until they do it's hard to anticipate

#1 Wellington vs Jupiter
Wellington has controlled this district for several years now, Jupiter has high hopes.

Oxbridge Academy vs Cardinal Newman
Both Newman and Oxbridge are off to disappointing starts to the season. This game could be just the thing to kick start them for a year end push.

Atlantic vs #2 Lake Worth
The first matchup this year went into OT. We expect the same this time around.

Palm Beach Central vs #1 Wellington
Big time rivalry game out west, this may be Central's year to finally knock off their crosstown foe.

Not listed here are several games for the upcoming Martin Luther King Jr holiday tournaments which will once again put #PBCHOOPS teams in highly competitive match-ups. Look out for that preview later this week.