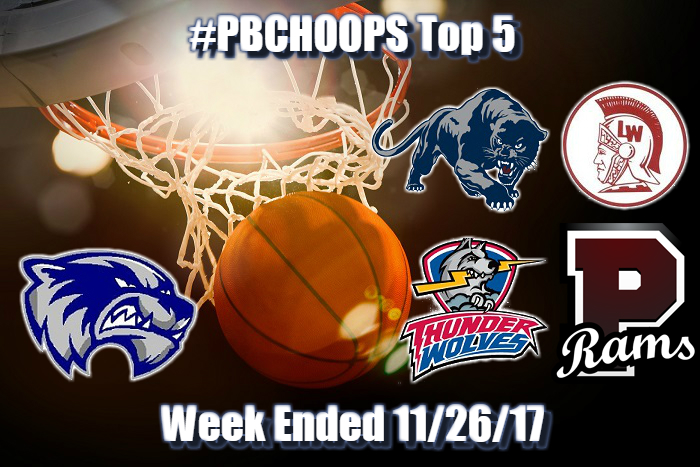 #pbchoops Top 5 week ending 11/26/17
1. Wellington
2. Oxbridge
3. Dwyer
4. Lake Worth
5. Palm Beach Lakes#pbchoopsTop5
Several big games this week to start the regular season so expect more shuffling in the weeks to come... The cream will rise to the top

Whether or not preseason games such as tip-off classic are true measurements of a teams performance is up for debate. No, they don't count as an official win or loss on the record but they do give insight on teams as they head into the season. Should teams be punished in the rankings for losses in the preseason is also a debatable topic. In the case of the #PBCHOOPS Top 5 we believe all games count, therefore this weeks rankings take into account results from various preseason Tip-Off classic games last week. Here is a look at the new Top 5:

#1 Wellington - The Wolverines move up to #1 after taking care of business against Atlantic and Atlantic Christian to start off the preseason. The #1 spot gets an immediate test Tuesday as Inlet Grove travels to Wellington in what should be a great game.

#2 Oxbridge Academy - It was hard to drop the Thunderwolves after close loss to the #3 team in Broward, Northeast. Oxbridge played tough despite not having their complete compliment of players, but came up just short. They face Inlet Grove this week as the Hurricanes look to make a statement in the district.

#3 Dwyer - The Panthers were missing from last weeks preseason rankings but proved they showed be back after impressive wins over Santaluces and Park Vista. It's hard to keep Dwyer out of any Top 5.

#4 Lake Worth - The Trojans big win over a tough Benjamin squad helped put them into the Top 5 after missing out in last weeks preseason rankings.

#5 Palm Beach Lakes - Lakes maintained their #5 ranking with solid performances against Grandview Prep and St Andrew's in a jamboree style tip-off classic in Boca. For the Rams to stay ranked however they will need to beat a tough Jupiter team and district rival Dwyer this week.

Three teams who were ranked in the preseason Top 5 dropped out of the rankings after losses in Tip-Off games. Atlantic, Suncoast and Boca Raton all played tough competition but came up just short. Continue to expect movement in the poll as several ranked teams play each other over the next coming weeks.

It's the first week of season but that doesn't mean things start off slow. There are plenty of blockbuster games to get the new season off right, here are some of the top games:

Inlet Grove vs #1 Wellington
This game matches up perhaps the 2 best pure scorers in the county, seniors Bryan Williams and Dante Moses. This is the first of two tough games for the Hurricanes as they face the #1 and #2 teams in the same week.

Atlantic vs Royal Palm Beach
This has the potential to be an excellent games. Atlantic still has a few kinks to work out as they enter the season, this will be a big step in finding out where they are at. The Wildcats have a tough squad and enough talent to play with anyone.

Cardinal Newman vs #4 Lake Worth
The Trojans face off against the new look Crusaders, this is a game we would have loved to see last year but we get it this year instead.

Jupiter Christian vs Benjamin
Jupiter Christian looked good at the Forest Hill Tip-Off tournament last week. Now they face a Benjamin team with high hopes for the season. For a small school match-up there will be plenty of talent in this game.

#3 Dwyer vs #5 Palm Beach Lakes
The Panthers and Rams start of district play early. Last year Lakes swept Dwyer going 3-0, don't think the Panthers have forgotten about that. This should be a battle.

Inlet Grove vs #2 Oxbridge Academy
Inlet will be coming off what should be a tough game against #1 Wellington only to face #2 Oxbridge in a pivotal district game.

The Kruel always has great games in a rgeat atmoshpere for hoops in South Florida. This year 3 of the 4 Palm Beach County teams represented are in the #PBCHOOPS Top 5 as they face some of Browards top programs.
#3 Dwyer vs Pines Charter
#5 Palm Beach Lakes vs Deerfield Beach
#2 Oxbridge Academy vs #5 Dillard

This just a quick look, there for sure plenty of other games that will make Week 1 a great one.