Behind the 2017-18 Boys Preseason #PBCHOOPSTOP5 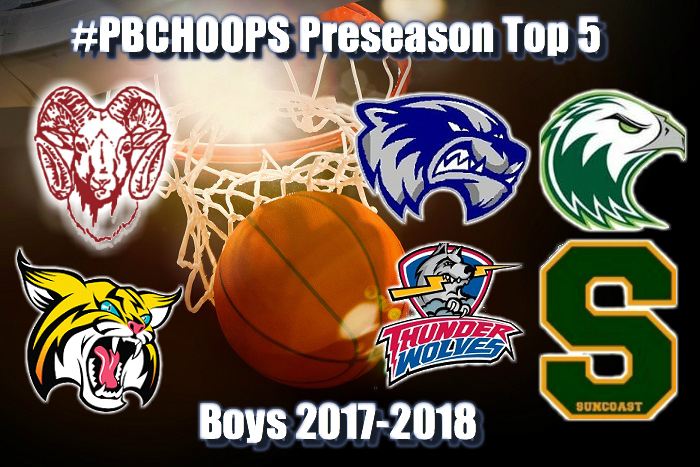 This year season starts a bit later as the FHSAA made a change to calendar causing games to start after the Thanksgiving holiday. Normally regular season games are in full swing by this time, instead the 2017-18 #pbchoops boys basketball season begins nest week while preseason starts tonight. Either way games are starting and as mentioned in our season preview talent is spread all across the county . This made doing a preseason ranking of the top 5 teams almost impossible, there are more than 12 teams worthy of the 5 spots (well 6, there was a tie at #5) . Here's the breakdown on the rankings:

#1 Oxbridge Academy - Oxbridge has what it takes to win the state title in 5A, getting there will be a challenge however.

#2 Wellington - For some people seeing Wellington so high in the rankings after losing Trent Frazier to graduation is a surprise, it's not, they are that good. The Wolverine team is discipline, well coached and will out execute most the teams they face. This group will by led by another solid backcourt that make plays and can shoot. They get to back up that #2 ranking tonight as they face #3 Atlantic in pre-season.

#3 Atlantic - The Eagles have a legitimate argument at being in the #1 spot. This fall they beat several top teams and have perhaps the most talented roster in the area. Tonight is a big step in proving the rankings wrong, a win against #2 Wellington tonight would make the argument even stronger. No matter the outcome Atlantic will be the team beat all season.

#4 Suncoast - The Chargers return pretty much the same team from last years district championship team that finished the season ranked #5. The roster is solid once again with great guard play and scoring that will be complemented in spots by some young guns with size that should contribute from day 1.

#5 Boca Raton - The Bobcats are back once again in the top 5 and waste no time as they start of the preseason versus Westminster Academy and Cardinal Gibbons two top teams from Broward county. Boca always plays a tough schedule, the key this year is to take care of business in district play. If they do that they will be in a great position come playoff time.

#5 Palm Beach Lakes - Last year we made the mistake of not ranking Lakes in the preseason Top 5, we didn't make the same mistake this year. While they lost 4 seniors we still expect big things from the Rams. One thing they can do that not many teams in the area can do is shoot, and make shots consistently. When you can do that and play defense, they will be in every game.

The poll is also defined by who did not make it in the first ranking as much as who did. Dwyer, Royal Palm Bach, Forest Hill and Lake Worth are the biggest omission as they just missed out. Don't expect them to be out of the mix very long. They are talented and can beat anyone on a given night. Expect them all to make an appearance sometime or other this season.

The time for talking and hypothetical rankings is done. The 2017-18 season starts next week and preseason tonight look for some great games and great season. Our preseason coverage doesn't stop we are currently releasing our #PBCHOOPS Preseason Player list click the links below to see the players to know so far.

#PBCHOOPS Watch List - Players we will have an eye on this season http://pbchoops.com/pbchoops/watchlist2017-18season