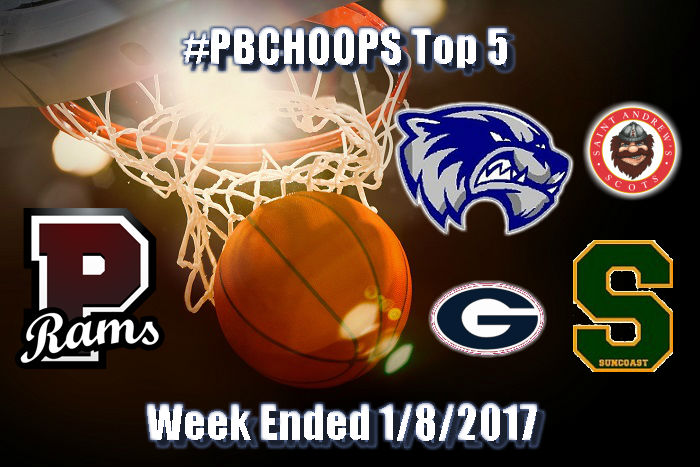 Been a real busy last 2 weeks trying to keep up with #PBCHOOPS teams playing in a variety of holiday events both locally and out of area. Tried our best to cover as much as possible but still ended missing out on last weeks POTW and rankings breakdown. This week things are almost back to normal with key district games and traditional MLK event hosted by Tournament of Champions.

#1 St Andrew's (15-0) PR 19.75 - St Andrew's continues to impress and looking back on it now it really shouldn't be much of a surprise as to what is happening so far. Last year the Scots were seconds away from a trip to Lakeland. This season they returned pretty much everyone from last years squad, replaced the size lost with more agility and quickness. Saturday the Scots notched a big victory over Oxbridge to keep their unbeaten streak alive. Over the next week the team will be in the Keys as part of the schools yearly Worldwide Immersion Program while playing games against local teams from the keys..

#2 Palm Beach Lakes (12-2) PR 16.50005 - The Rams were off to start the new year but will be tested right away as they host district rival Dwyer Tuesday followed by a meeting in @TOCSports MLK Classic event.

#4 Wellington (14-2) PR 16.50 - The Wolverines played their way back into the power rankings with 6-0 Christmas break which included 2 championships. Trent Frazier led they way averaging more than 30 points per game.

#5 Suncoast (12-4) PR 15.75 - Suncoast dropped a few spots but not out of the top 5. Their strength of schedule so far has kept them in the mix. Couple that with a few injuries to key contributors over the last 5 games, the Chargers when healthy have proved they are a top team.

Tuesday January 10, 2017
7:30 PM: Dwyer vs. Palm Beach Lakes - The first of 2 rematches for Dwyer this week. Win both and they pretty much have the top seed in the district secure. Lakes has the same opportunity, a win over Dwyer puts them in the drives seat.

7:30 PM:Lake Worth vs. Boca Raton - Lake Worth got the best of Boca the first time around, for the rematch both teams have improved. Should be a close well played game, winner gets a much needed leg up in the district.

7:30 PM Somerset Canyons vs Benjamin - Nice match-up between to solid teams. Somerset has some nice pieces while Benjamin is led by sophs Kaiir Elam and Ben Labarsky

Friday January 13, 2017
Royal Palm Beach vs Dwyer - second set of rematches and win or lose TUesday for dwyer should still have district ramafications.

Boca Raton vs Atlantic - Boca took the first game and is playing much butter, Atlantic has been struggling closing out games

Lake Worth vs Park Vista - Big district game for both teams

Saturday January 14, 2017
TBD IMG vs Cardinal Newman - High Profile game for Newman, IMG has played the top teams in the country. A solid measurement game for the Crusaders.