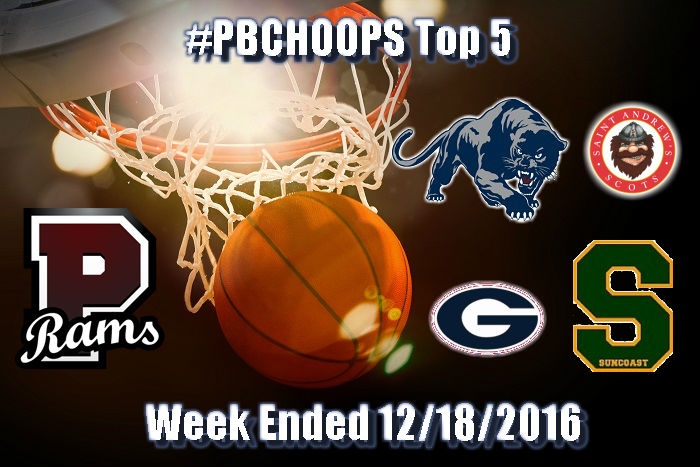 One of the craziest weeks of #PBCHOOPS is in the books, now we are left to pick up the pieces and try to make sense out of what seems to make no sense. This week, the introduction of Power Rankings helps change the norm when ranking teams, there are no automatic drops or advancements. Win/Loss record, head to head games, wins against top 15 Power Ranked teams, unranked losses and strength of schedule are the key metrics that factor into the final poll. This week saw drastic movement as compared to last weeks Top 5 and will continue to reward teams that perform well against the counties top competition.

#1 St Andrew's (11-0) PR 16.75 - The Scots spent the weekend at the Kreul Classic. Saturday they went toe to toe with Orlando Edgewater in a well played tightly contested game. St Andrew's finished strong and closed out for the victory solidifying their #1 spot. They continue at the Kreul this week.

#2 Suncoast (8-2) PR 13.75 - The Chargers bolted into the Top 5 with a string of closely contested games against ranked opponents, capped off by a victory over #3 Palm Beach Lakes on Saturday. The Chargers have played one of the counties tougher schedules with 4 games against team ranked of the top 15 of Power Rankings.

#3 Palm Beach Lakes (9-2) PR 13.50 - One day after a big district win at Dwyer, the Rams fell to rival Suncoast. Lakes has faced 5 Power Ranked teams, the most of any team in the poll. They are 3-2 in those games. Nothing changes this week as they head down to Royal Palm for a pivotal district game.

#4 Grandview Prep (10-0) PR 12.50 - Grandview continued their undefeated season with a win over Village Academy, this week they look to continue that streak against Westwood Christian Friday.

Boynton Beach vs #5 Dwyer - Boynton has been battling all season and heads to Dwyer in hopes of getting a very important district win.

Westwood Christain vs #4 Grandview Prep - Miami-Westwood Christian heads up to Boca to face the Pride. Westwood comes in with 1 loss against nationally ranked Miami Christian while Grandview is still undefeated and hasn't really been tested. A win against Westwood would move Grandview up the Power Rankings.